I wish I had a photograph of this memory. But I don’t remember even owning a cell phone at the time or, if I did, I’d left it at home…where it belonged.

Once, years ago, I took my sons to Centennial Beach in Tsawwassen on Christmas Eve. It is a beautiful place, looking across the water to the town of White Rock. And to the south west is that bit of America, Point Roberts, rather wild looking.

It was a rare December day in its sunshine and clear cold; we do not have many of those days in the Lower Mainland of BC.

Rarer even, at the time, at that beach, one could build a fire, summer or winter. Though to that date, I’d never seen a winter fire going.

But that frosty Christmas Eve day, one fire pit was roaring, sparking into the crisp air, and there were two ageing women sharing the warmth. They’d brought fold-out chairs and afghans, and were bundled up with heavy bowls of soup in their hands. I remember the steam curling up from the bowls, and their hands holding those bowls and spoons, and their faces.

They were deeply in conversation, enjoying their meal, taking pleasure in the fire and the bright frost, and the togetherness.

Those were the years when I went to the beach at least once a week with my sons. And even as I did that, I was aware that that time in my life was passing, that one day I would not be here with them, that they would grow up and away, and that was natural and healthy. But that I would grow old and life would change, and change might be terrifying. I might be alone someday. Little did I know my spouse would be not with us anymore not many years after that, when my youngest was still in his mid teens.

I looked at those two friends–friends of many years, I would guess–and felt reassured that while life would move on in its way, there were good times to come. All one had to do for a memorable time was to pack a hot lunch on a cold day, and a blanket, and box of matches.

So now I spend a day writing by my Christmas tree, in my home in the city where I now live, and my woodstove crackles, and I remember that day, and those two friends. Little did they know how I needed to see that, and hear their laughter over the sand. 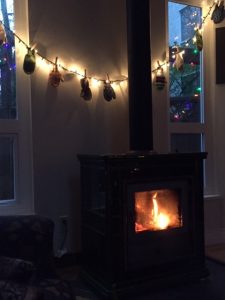