I live, teach, and write in Vancouver, British Columbia. I grew up with three brothers in the nearby Delta ‘burb, and have lived with three sons. I suspect this is why quite a number of my stories are written through the eyes and minds of boys.

My life has been filled with turns. An academic might say it’s been “recursive.”  A kid would say I’ve been going around in circles.  But it’s—so far—been an interesting path. The one thing that has been consistent throughout is my need to write. That’s what distinguishes a writer from other folks: the need to put words on paper.  Because really, that’s all it is: just words on paper. 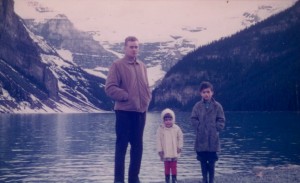 Lake Louise 1967, with my dad and brother