We’ve had such a short summer. Particularly so, after last year, that stretched from April through to October, one long lazy stretch and yawn–a wonder. But this, was rain and sog through June. Shining in July, sure enough, but blasting us with November jolts now and again to keep us in line, and then such an abrupt end.

I know it’s come when the boys haven’t gone in the pool for a four day stretch. It’s over, and putting it off is only that: putting it off.

It takes a solid day and half and two nights to empty the pool–two hoses, and the drain open for the last night. With apologies to the neighbours…but my guess is, with the rain, they never noticed. Such planning: add no chemicals the last week.

There’s a sudden brightening of the grass then. Always surprising how quickly. This year, the morning I awoke and it was empty (just as at the end of June, there’s a morning I awake and it’s full), the raining was sluicing over it. There was a sense of overness, some futility. I couldn’t finish the process, clean, and pack it up; not in the rain. 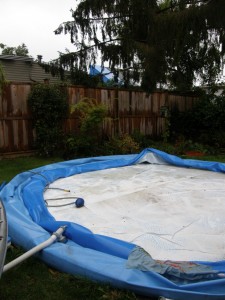 So I pulled the box of Okanagan preaches from the fridge, and began to slice, thin, thin slices, for the dehydrator. An hour later, the house had the heavy sweet fragrance of drying peaches–a definite fall smell–and I was torn, by missing summer, wanting to hold to summer, feeling some burgeoning sense of fall.

I was to meet a former student for a coffee, she just returned from Korea, and now in our summer cold. Starbucks. I’m in there once a year whether or not I like it. I make a point of going to the independent coffee places, but Jeyn was already there. With her coffee, at a table. I stood at the counter, the rain down, coming down outside. I ordered my coffee from the wee chalkboard on the counter. The woman behind me ordered her strawberry-banana smoothie–should have sounded refreshing, but just sounded cold. I picked up my pumpkin spice latte BIG…and realized maybe I was more on my way to fall than I liked to think…