Emmett and I are agreed: that was the best Halloween ever. And in no small part, because of the weather! The afternoon of the 30th was wet and windy, and made us a bit nervous…

The day was the clearest, brightest.  I was compelled to go outside and work in the yard in the afternoon, and the sun on my back was HOT. I mowed the lawn for the last time, and shut up the mower. I cut dead things out, and had a glimpse of green hiding away at the surface of the ground, for next year. And once again, I was struck by how, through this particularly difficult summer, the weather has been a friend. I felt a deep sense of gratitude for that.

Then the moon came out–full! 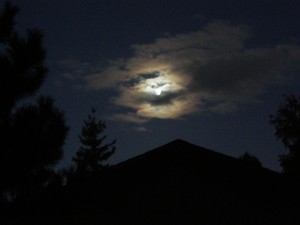 Perfect for the night. With Daylight Savings happening a week later now, it’s still light until after 6.  But we were out as soon as it was dark, and the smell of the evening was there: the fireworks (a big Yes to those Deltans brave enough to light up and away in spite of the bylaw–we can’t have Halloween without fireworks!), the crunchy smell of newly fallen leaves, the earthy, composty, mushroomy…altogether with the smell of autumn flowers and over-ripe fruit. Glorious.

A friend asked where the oohs and aahs were, with the backyard fireworks. Maybe folks are still afraid to do that. Last year, there was almost no fireworks at all, except for the odd young teen with LadyFingers snapping behind a school. This year, folks realized that the cost of a fine is half the cost of a permit, and they went to the nearest Muni and bought some works. Next year, let’s ooh and aah!

Another blessing of the weather and the yard: 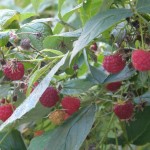 this morning I–once again–went out and picked my fall-bearing heritage raspberries. Enough for a bowl of cereal. Actually, they’re not even mine: they’re the neighbour’s, and she asked me a year ago spring, if I’d mind if a few slipped under the fence and chose to grow on my side. I should be so lucky. Never too late for Thanksgiving.