I grew up making gingerbread houses every Christmas. Mom would  make her own pattern, and all four of us would decorate it. It would be quite big and square and we would decorate with those “ribbon” candies…what are they called? Whenever I see them, I think “Christmas” and “fifties.”

After my first son was born, I began to make them. But when I made them as big as Mom’s, they’d flop to pieces. The icing glue never worked, and I lacked her patience with supporting the pieces with all manner of kitchen stuff. She was quite elaborate with folded kitchen towels and such…

So I made smaller houses, and as my sons numbered two, then three, I made another and another. Then one year I discovered icing made with only sugar and egg white: glue! And we made a small sleigh and reindeer.

In 2004, we went to the UK. Emmett had just turned five. Six months later, at Christmas, he suggested we make a castle…with a water wheel (he was so impressed by that wheel in the Welsh medieval village)…so we did. And we have until this year. 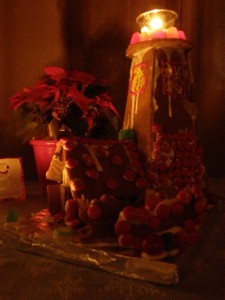 When I first suggested we make a lighthouse, he balked. But once we began to put it together, and began to decorate, the castle thoughts began to fly. When I said, “Maybe next year, we should try something else again,” he said a simple “Sure.”

Surely a year to leave routine behind…

What will it be?