in medias res, in the middle of things, is trotted out in writing classes as THE place to begin telling a story. I was taught it. I have taught it. I read it in the “successful” books now being published.

So when I sat to begin reading with my son this past week, and he interrupted me after a few pages to say, “I hate it when a book starts in the middle of the story,” (uh, did I mention this was my first published book we were reading?) it was a bit of a shock.

“It’s starting right in the middle.” (Yes, dear, it’s supposed to. In medias res.) “And it shouldn’t. It should build up, and set it up, and take time.”

Exactly what we don’t have. And if I do that–if I ‘take time’–I don’t have a hope of finding an editor, a publisher, let alone those marketing people, to publish my book. But how to explain that to an angry-looking red-head who is asking for setting.

This son, my third, is not a happy reader. He only began to enjoy reading after about six months of home-learning in grade 5. Before that, it was a chore; a school-task. And now there are many books he sets aside, often returning to a small number of default.

A month ago he explained to me that when he reads Harry Potter to himself, he can “see” the story. Other writers don’t quite manage to do that in the same way, though if I read aloud to him…after awhile…then he can also “see” the story.

I’m learning. Although just how I’ll use this knowledge, I’m not sure. J.K. Rowling creates visuals and begins with setting up the story. While I’ve tried to create visuals in my work, certainly, I haven’t done so with the thought of time-taking, setting-up, and I’ve never thought of visuals and setting in terms of the needs of reluctant readers. I’ve been quick to agree that it is exactly those readers–reluctant–who need the in medias res, otherwise they won’t stay with us. Perhaps it’s the very speed with which we attempt to haul ’em in that turns them off and causes us to lose them. We need to get the film reel moving, but first we need to give them the theatre, the feel of the plush seats, the smell of popcorn with real butter, the lights that carve out the path to follow in the floor, the old woman, hunched in the nearby seat who turns up by herself for the afternoon matinee…maybe a digression into the life of the young teen sweeping up kernels and scraps from the floor (why is he here during school hours?)…there’s music playing in the theatre. Let’s see…it’s the soundtrack of… 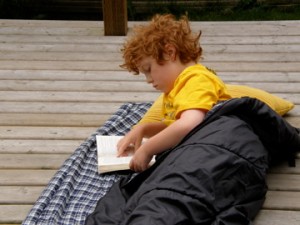