Yesterday I spent the better part of a day in a booth at 100 Hamilton Street in Vancouver–the CBC Radio building. The booth was carpeted and dark and filled with equipment. All I needed to do was put on headphones and speak into the big microphone. I’m such a tech-dummy that I forgot to put on the headphones and it wasn’t until I heard a voice–a small faraway voice–and looked for a volume button…though I could not recall being told anything about “volume”… at last it occurred to me to put on the headphones. Wow. I can only laugh at myself sometimes. 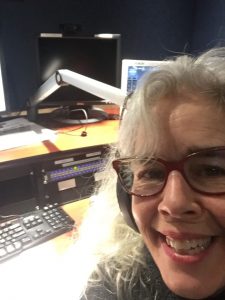 I grew up without television for the most part, and while my father listened to a bit of radio news, for the most part my home was silent in terms of media. Even music, records played on the stereo, was never background. No, if you put on a record, you were supposed to sit and listen to it. And true, music IS something to listen to, but it’s also good just to play it and enjoy.

It wasn’t until I met my husband Marty that I actually listened to our national radio. And because I was not aurally initiated, it took a number of months to begin to be able to absorb words in this way–yes, this was true for me. Marty on the other hand, grew up with the CBC. When we visited his father in his upholstery shop, CBC was on, and Don would work with the radio voices as his co-workers through the day. Then listen more at home at night.

The title of my memoir, Dance Me to the End, is from CBC radio. It is Leonard Cohen’s song title, and yes, I’d heard it before I heard it on the radio, but there was a morning when I was caregiving my husband, and I had to pause because the song had come on, and I was hearing the words as I hadn’t before. And yes, there is a poem in the book that opens with a line about CBC in the morning.

Marty passed away on a Sunday, and I remember my hand on the dial, turning off the radio that day. I remember other times, later, and trying to turn it back on. But in truth, I have not been able to listen to CBC as I used to; it is so connected in my mind with other times.

A couple months ago, I received an email from the publicist working to promote my book: she shared that she’d had a request for me to do a spot with CBC Syndication…meaning, short interviews with various show hosts from across the country, the ultimate in getting out the word about one’s work in this country. Exciting news indeed! The publicist and my publisher were thrilled, and I was too, along with a bit anxious to do this right, and also a sense of circling back to something…

A week ago, I found the right number on my car radio as I was on a lengthy drive, and listened again to the station that was, for decades, such a part of my life. I realized, as I listened, how this had been such a source of knowledge of my world. And how I have missed it. I wrestled with the sadness, too.

So yesterday, I showed up. I was led to the booth. I finally figured out the headphones before they tossed me out. And the first interview happened. After the second was over, and there were just some short seconds before signing off, the host wished me all the best “with the others,” as he knows the process, and nature of being asked similar questions repeatedly, and also with a thought to the subject matter of my memoir, the re-living of painful times. In fact, a small number of hosts did, in those post-interview seconds, share their own losses. At some point, I realized that as difficult as I might find talking, they too have jobs that demand speaking about the uncomfortable–probably often. And then continuing on to the next… That is not easy.

There was a knock on the door of my booth. I was so immersed in the process to that halfway point, that I had to think about where I was, bring myself back. A woman was looking in through the narrow glass panel in the door. Gloria Macarenko. A familiar voice. “Let’s do this one face to face,” she said and led me to her office. She mentioned the coldness in my booth, something about a flood in the building, and how the heat was working and not working.

We did the interview. She asked me how Marty would feel about what is happening now with the book. I started to answer, and then laughed and said how pleased he would be that I am here, at the CBC, doing this. How that would mean something to him.

She walked with me back to the booth and asked if I might need a shawl. I had a woolly sweater. But was warmed more by her offer.

Such professionalism in her work, and yet such human compassion, too. The two can co-habit. I could feel similar from the remote hosts, too. And as I went through the second half of interviews I was remembering what it was to feel connected with the CBC. I caught a bit of news from one station–weather and such–and felt the size of the country, and the tenuous threads that hold us together.

As I gathered my belongings to leave the booth, I knew I had another gift in my life: I was back home with the CBC. This process, the writing, the sharing the writing, has made it new. And that’s how we return after grieving. 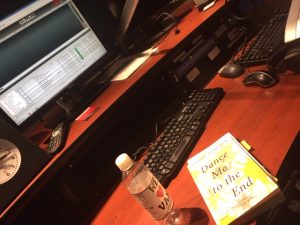