On my way to teach I drive through Kitsilano, along Beach Avenue, and then 4th. Second day of teaching in the new year, less than a month since Dad passed away.

And I see this: 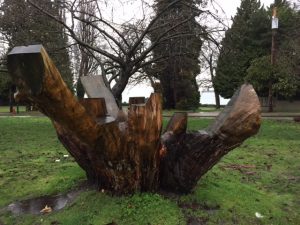 Look closely and you’ll see at least four seats with reclining backs cut into these tree trunks. When it’s not grey and pouring rain–as it was in early January–you can sit back and look up at the stars…I’m guessing. I’ll have to return on a clear night. With a friend or two or three.

My first thought, when I saw this, was that I’d have to share it with Dad. He has a thing about big trees, and enjoying them for years, and then taking them down once they get too old. But not like most would. No. He creates picnic places and magic when he does this. Here are Dad’s trees: 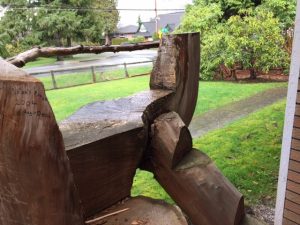 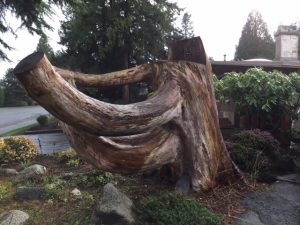 When I passed the tree by the beach, I didn’t stop. I continued, took the corner onto 4th Avenue, found myself looking at the clock; I’d been hoping to get to work early to allow my brain time to pull together the last threads before a lecture, and the energy I need for that.

If I were to stop, I’d have less time. Yet even as I drove on, my thoughts were stopped at that tree, and words were coming in to my head about it. These words. I realized that if I took the next right, and the one after that, I’d end up back at the tree. How long could it take, I thought, to get out of my car, walk through the rain, take the pic, and get back in? Would it really make me late?

So I turned and did just that. Took a half dozen photos from various angles, and was a bit wet when I climbed back into the warm car.

The clock said I’d spent a mere seven minutes. And I arrived in my office no later than I’d planned anyway.

I wrestle with teaching. I teach what I love to do; I teach writing. But teaching writing, and writing, are not the same things. They both bring different types of energy to me. And the energy that sustains me, and has through the past few years–in particular, beginning with the journal I kept while my spouse was ill–is the energy that comes from writing. That is the energy I need to feed myself before anything else can happen.

It’s like the yellow oxygen mask that is supposed to fall out of the compartment overhead if an airplane is going down; you’re supposed to do it for yourself first, before others.

So I took the right turn, got the pictures, and am now writing the words that began to churn through my mind. And I notice that the above words about my dad and his love of whimsical tree cuts are in present tense. So maybe there is another reason to have done this, and even to write.